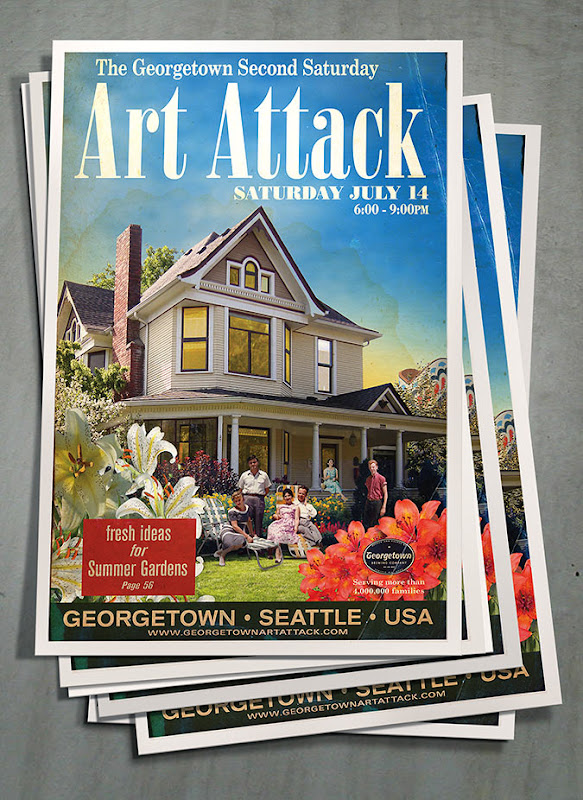 Don’t miss the “Better Homes and Gardens” installment of the Georgetown Art Attack in July. Nice summer motif, assuming summer ever arrives. (I just checked, and it’s not happening today.)

We’ve started a flickr photo pool to document the 2012 Georgetown Carnival (and eventually all things Georgetown). If you took a couple of photos that you want to share, feel free to upload them, anybody can join.

You can find the Georgetown Carnival Photo Pool here. Fantagraphics Bookstore & Gallery is pleased to present Joe Sacco celebrating his new book Journalism. Visitors to this signing will be among the first in the nation to see the book, which will be officially released 10 days later. Don’t miss this opportunity to meet this extraordinary artist and pick up an advance copy of the book.

Kree Arvanitas is the former owner of internationally renowned Gilded Lilies Henna Arts based in Seattle Washington, now known as HennaDervish. Since 1996 Kree has been known as a creative and innovative force in the henna world. She is an experienced graphic and digital artist, photographer and writer.

Kree has been an illustrator and painter all her life, loves to travel, and over the last few years has pioneered the use of henna as a mixed media tool. Her digital collages and innovative techniques have been part of the global henna renaissance.

Chris McMullen has been working with steel from his Seattle studio since 2000. A fascination with industrial process and a background in Graphic Communication has led to a body of work consisting of machine-like, interactive sculptures.

As well as creating sculpture, he was invited to teach a class in Creative Mechanical Movement at Pratt Fine Arts Center in Seattle, WA in summer of 2009 and was a guest speaker for The Seattle Metals Guild.

His work can be found at chrismcmullenproductions.com

John Osgood‘s artwork has a street style feel with an urban design and is inspired by street art, as well as Picasso’s cubist period, Basquiat and Pollock. John’s studio is located inside Bherd Studios Gallery which is conveniently located in the Greenwood neighborhood of Seattle. John also offers custom Design Services.
For more information, please email John at: gallery@bherdstudios.com

Rat City Rollergirls will be out in full force; swing by the Betty Ford Galaxy Bean Bag game, and the Water Balloon Toss, as well as a merch table.